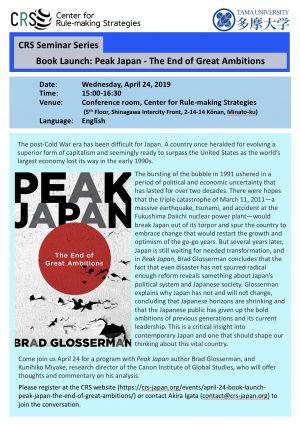 The post-Cold War era has been difficult for Japan. A country once heralded for evolving a superior form of capitalism and seemingly ready to surpass the United States as the world’s largest economy lost its way in the early 1990s.

The bursting of the bubble in 1991 ushered in a period of political and economic uncertainty that has lasted for over two decades. There were hopes that the triple catastrophe of March 11, 2011—a massive earthquake, tsunami, and accident at the Fukushima Daiichi nuclear power plant—would break Japan out of its torpor and spur the country to embrace change that would restart the growth and optimism of the go-go years. But several years later, Japan is still waiting for needed transformation, and in Peak Japan, Brad Glosserman concludes that the fact that even disaster has not spurred radical enough reform reveals something about Japan’s political system and Japanese society. Glosserman explains why Japan has not and will not change, concluding that Japanese horizons are shrinking and that the Japanese public has given up the bold ambitions of previous generations and its current leadership. This is a critical insight into contemporary Japan and one that should shape our thinking about this vital country.

Come join us April 24 for a program with Peak Japan author Brad Glosserman, and Kunihiko Miyake, research director of the Canon Institute of Global Studies, who will offer thoughts and commentary on his analysis.